As essential workers, courts and tribunals staff have worked throughout the pandemic.

Here, some of our people reflect on their experience of working on the frontline. 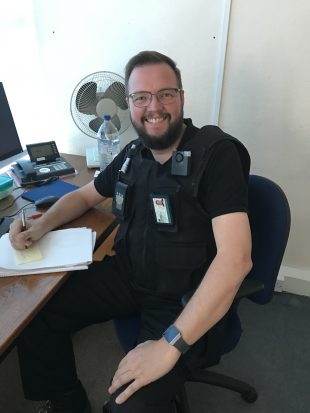 Nicholas Blackmore is a County Court Bailiff based in Hampshire. Although some of his work, such as evictions, stopped because of the pandemic Nicholas and other county court bailiffs immediately started doing other work to support the work of the courts.

“I always say that the bailiffs have been the Swiss army knife of the courts service during the pandemic. We’ve been needed for everything, from serving papers, taking files to judges and taking equipment to staff working from home.

“Friends were surprised when I said I was still working; they said to me they thought all courts were closed, but how could they close completely? So much of our work is about protecting vulnerable people – it’s essential.”

“All the listed hearings, at first, were turned into case management hearings that were heard remotely. The judges wanted to make sure that we made progress and so, week by week, we were converting hearings. We had no idea how long restrictions would last, so we couldn’t plan months in advance.

“We then started to hold full hearings remotely, first with Skype and then with Cloud Video Platform (CVP). At first it could sometimes be hard convincing parties to take part remotely, but people have very quickly adapted to it.

“The thing that’s struck me the most is how committed our professional users, our staff and our judges have been to make a success of things. Everyone has been really supportive and understanding.

“I’ve seen so much innovation since last March; people on all levels have really been empowered to come up with ideas about how we could work differently. A week later, you’d see that idea put into practice. Across the Civil Service there’s been amazing work during the pandemic and that’s been wonderful to see and it’s made me proud to be part of it.”

Phil Smith is an Usher and Witness Liaison Officer, based in magistrates’ courts in West Sussex.

“I know if I’d asked my line manager if I could avoid face-to-face work I’d have been supported to do so. I could also have just called it a day, chosen to retire and pack up, but I didn’t want to do that. I enjoy my work as an usher, I enjoy meeting and helping court users, especially in my role as witness liaison officer.

“We’re now hearing cases using Cloud Video Platform (CVP) and I’ve been involved in creating a national usher training course. This looks at the training from the viewpoint of an end user.

“I’m pleased I’ve been able to contribute in some way to keeping the justice system running. At the end of all this, we can all give each other a little nod and all know we’ve all done our bit and done our duty; I’m no different to anyone else here.”

Jason Haines is a Small Claims Mediator, based in Preston.

“Our work has always been over the telephone and that has continued. But many of us have had to adapt to working flexibly throughout the pandemic - with most of us swapping court-based locations to home working.

“The main challenge we have faced as mediators is uncertainty. Parties coming to mediation may have been furloughed, made redundant or had their business interrupted through lockdown.

“This has impacted on their confidence in where they will be in the coming months and they are therefore nervous about settling matters at mediation.” 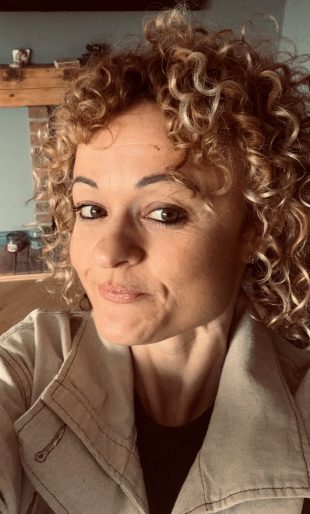 Sarah Appleby is a Court Associate, based in Kent. In her role, she sits with a District Judge, running a court by taking pleas, recording results and working with the various parties in a case.

“Before COVID we’d use video facilities to link to defendants in custody, or to vulnerable victims or witnesses but now we’re using video in many more ways.

“Now, prosecutors, defence solicitors and other parties can join remotely too. It’s definitely made sense to offer hearings in this way.

“While I’ve seen my work change as a result of the pandemic, I think the real unsung heroes in courts are the people who’ve been making the virtual hearings happen, people like our ushers. None of what we’ve achieved would be possible without the amazing people we have working in courts – they’ve been incredible and having to work in completely new ways.”

HMCTS has also been supporting staff to work from home wherever possible.

Udaysinh Modhavadiya is a Mediation Support Officer, based in Leicestershire. He’s been based at home since the pandemic began.

“There are some challenges. In the office if there’s an issue you need to deal with, you can just go over and talk to a colleague, whereas now you have to send them a message or arrange a call. But overall I’ve found working from home positive, and I’m grateful to HMCTS for supporting me to do so.”

Adam Rosenberg is a Query Management and Case Administrator (QMCA), based at Stoke Courts and Tribunals Service Centre (CTSC). He handles calls and emails from the public and professional court users about Social Security and Child Support (SSCS) tribunals.

“I started a new job for a new organisation in the middle of the pandemic. I’ve now been here seven or eight months and I’ve been 100 per cent working from home, other than three short trips to the office.

“I know some people find the switch to homeworking hard, but I’ve never known this job any other way. Working this way suits me really well and I’m soon starting a new role, training people to work as QMCAs. I really feel I’ve thrived.

“It can sometimes be hard to settle into a new role, or in a new place, but I’ve got to know people through my work with the Diversity, Equality and Inclusion Group and my interest in LGBT+ issues.” 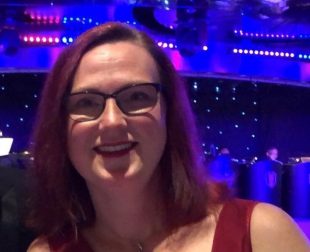 Sharon Lewis, is an Usher and Witness Liaison Officer working on family cases in Suffolk. She has been shielding since last March, but has continued working thanks to new technology being introduced to courts and tribunals.

“My last day where I was physically in work was 23 March 2020. I spent that day putting together my stuff not knowing what I would do and how things would pan out as at that point all of my equipment was static and my role very much based within the court building.

“Had I been able to do my work from home at that point, I would have. But as I was in the shielding group, I was put on special leave, and waited for the right equipment and processes to be put in place so I could work remotely.

“Once we started holding remote hearings by Skype and Cloud Video Platform (CVP) I was able to start clerking from home on a laptop and that was great. However, there were some things I couldn’t do from home.

“As I still had time available I suggested to my manager that I could take on some of the administrative work too. I wanted to do whatever I could, whatever needed doing, to support my colleagues, the court and the justice system. Now that the Ipswich County Court building is deemed COVID-secure we are starting to have a mixture of remote and in person hearings.

“We’ve achieved so much in such a short space of time; I only started at HMCTS six years ago, but even then everything was paper-based. And now, whole hearings can take place with everyone in separate locations. Often, that’s not ideal, but having it as an option is a positive thing.

“The way we’ve responded to the pandemic has shown that HMCTS and the justice system is able to be flexible and respond to changes in the world.”