One of the largest cities in the UK and the economic capital of Yorkshire, Leeds is not only famous for its politics, music and sport, but also as the birthplace of many famous people, some of whom have been instrumental in shaping society as we know it today. 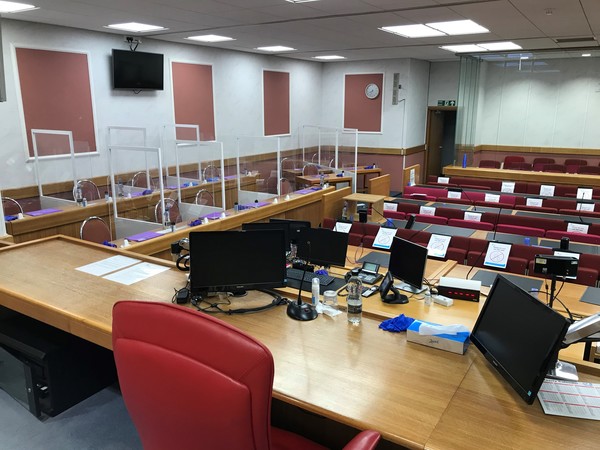 First World War Prime Minister Henry Herbert Asquith was born on the outskirts of the city.  He practiced law before pursuing his political ambitions and played a major part in introducing legislation changes, including the Parliament Act of 1911, which drastically changed the way the British government operated.

Leeds Crown Court, in the heart of the city, has a picture of H.H. (as he was known) in reception, as a reminder of the city’s proud heritage.

I’m also proud to be part of the team at the Crown Court in Leeds as we work hard to continue to provide a justice service to our communities, in these extraordinary times.

Before the impacts of the coronavirus pandemic took hold, we could accommodate on average eight to ten trials at the same time. Since March all that changed as jury trials, like so many other aspects of our professional and personal lives, were put on hold to comply with the necessary measures and guidelines put in place by public health and government advisors to minimise the spread of the virus.

As we considered our options to re-start jury trials in May, it soon became clear that even our larger courtrooms couldn’t be safely configured to fit a jury of 12 people, the defendant, witnesses, court staff, advocates and the judge.

After extensive consultation with our building contractors and colleagues, the design we settled on involved removing some fixed seating and bespoke solutions which allow the jurors to sit inside booths, creating a physical barrier between them. We added a raised plinth and extra seating at one side of the jury box. We’re using moveable acrylic screens, rather than static booths, which can be used in several of our courtrooms.

The layout allows jurors to see everything in the courtroom, fitting a front screen to each row for the protection of jurors and counsel together with T-sections on the return to the side screens and a plinth to ensure that the judge can see all the jurors.

We heard our first trial on 15 July 2020, which lasted two days. We allocated each member of the jury panel in waiting a specific number when they arrived so they could easily identify their seat in the jury assembly area, courtroom and jury deliberating room. We had a room large enough to allow 12 jurors to deliberate with two-metre social distancing gaps between them. Our ushers were briefed to ensure social distancing both in the assembly area and on the way to the courtroom, and we allocated two ushers to chaperone the jurors.

“Although the process involved in getting the courts fitted out has at times been frustrating, the end product has allowed us to recommence trials in a safe environment, something which we could otherwise not have done.

“Our delivery managers have worked tirelessly to ensure the systems for the movement of everyone in court operates seamlessly. It has been good for both the morale of the judges and the court staff who have worked together positively to make the trial process work.”

We moved to a medium-sized court for the second trial as the next largest court needed significant adjustments to the jury box. Since late August we’ve held trials at Leeds Crown Court continuously, using two courtrooms. We always ask jurors about their experiences and the overwhelming majority report positively, which is a huge testament to the hard work of all our staff to create a safe and secure environment – a formidable challenge in a large site across multiple floors.

We’re now scaling up the number of trials we can hear, with the assistance of four newly-installed Portakabins which we’ll use as accommodating areas and deliberating rooms for jurors. They’ll enable us to build up our capacity incrementally, week-on-week, up to six trial courts. We’ll carefully consider all impacts of scaling up on resourcing and to make sure we’re making the most effective use of our increased capacity as we build up to that milestone.

These measures run alongside those we’ve already implemented, like staggering listings to manage footfall through security, using our cafe for temporary consultation booths for advocates and scheduling more lists using the Cloud Video Platform. Even simpler solutions like changing the furniture jurors use to school-style desks have all had an impact.

Sharing the model and our experiences

The model we’ve developed here at Leeds is now being rolled out across the jurisdiction to many court centres that don’t have courtrooms large enough to hold jury trials.

I’m grateful to all those who have played their part in getting us to this point. It has been a huge collective effort involving ushers, the customer manager, judiciary, court clerks, other local HMCTS staff (drafted in to act as mock jurors to test our special measures), and to our digital support officers who have gone above and beyond expectations to make sure we can provide a continued effective service.

There are no short cuts and no quick fixes, but here in Leeds we have a pioneering reputation to live up to and, like our friend H.H., are not shy of a challenge.